Has work in private collections all over the world and in public collections in the North West including the Manchester City Art Gallery. Work illustrated in many art books and magazines and shown on television. Exhibits mostly in London and Manchester and has own studio and gallery (John McCombs Gallery) in Delph.

I am a landscape and figure painter who works mainly in oils. My subject matter is essentially the Pennine landscape centred in and around the village of Delph in Saddlesworth. It is an area of undulating landscape which appeals to my interest in form. I am interested in the nature of landscape; its sense of permanence but seen under a fleeting light. I also like painting the clothed figure and this can include crowd, group or single figure subjects based on the social and working life of the village.

Based upon observation my technique is that of using incisive but vigorous brush-line drawing over flatly applied areas of colour. It is an investigate technique where close study of the subject and personal expression become integral. It is an insistent as well as naturally based technique which has been developed to pin down my particular interest in form, space and movement while retaining life within the paint. All is intended to be enveloped within an aesthetic as well as meaningful whole which strives to speak for itself. 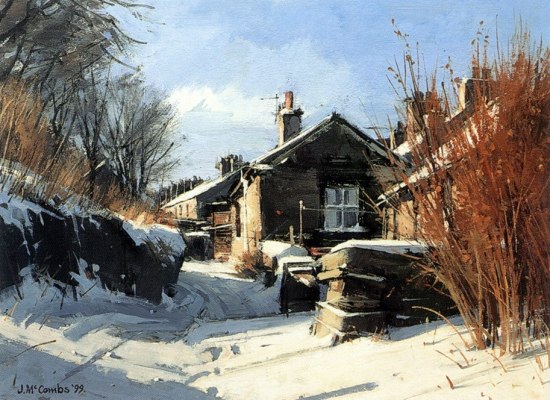