About > About the ROI 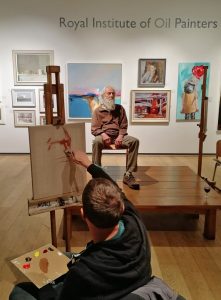 The Royal Institute of Oil Painters is the only major British art Society that promotes and exhibits work of the highest standard exclusively in the Oils. The ROI provides a centre of excellence and encouragement to all who love this robust medium and is based at the Mall Galleries, London SW1.  It is one of the 9 member societies that form the Federation of British Artists and holds its meetings in the Federation’s Mall Galleries, next to Trafalgar Square.

The Royal Institute of Oil Painters, was founded in 1882, and was granted royal status by King Edward VII in 1909. The Institute is confined to about 65 elected members and includes many of the leading artists in the country. It encompasses all styles and techniques which is a tradition that goes back to its inauguration.

The ROI Annual Open Exhibition is held in December when non-members are afforded the opportunity to exhibit alongside established ROI members.

Our annual show is a proud and long held tradition for the ROI, going right back to its beginnnings in 1882. Below you can see some of the more recently archived exhibitions from the Mall Galleries in London.