Following recent elections at the ROI AGM we have the great pleasure to announce the following new full members of the ROI:

We are also delighted that we have four newly elected Associate members.

Well done to all! 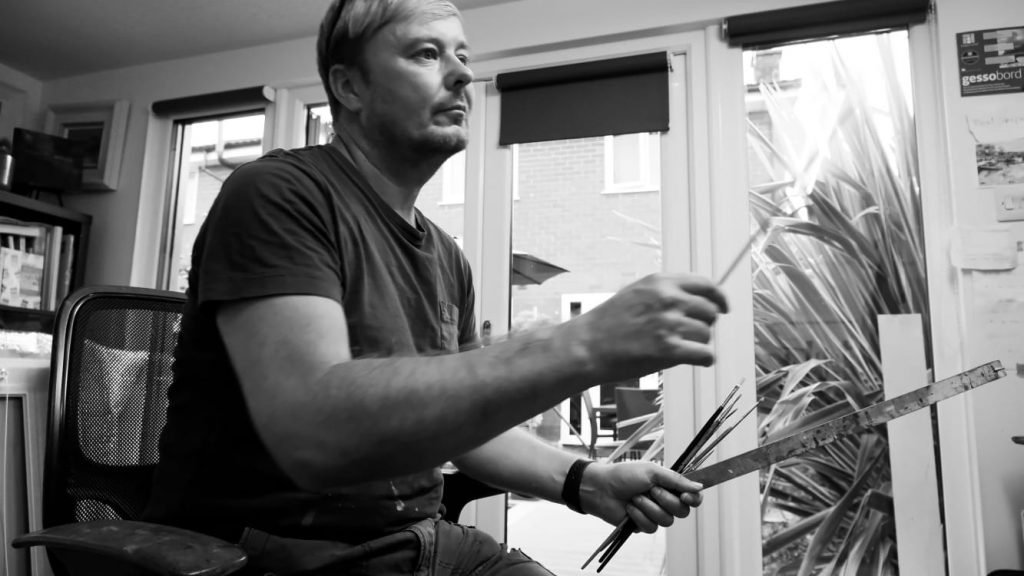 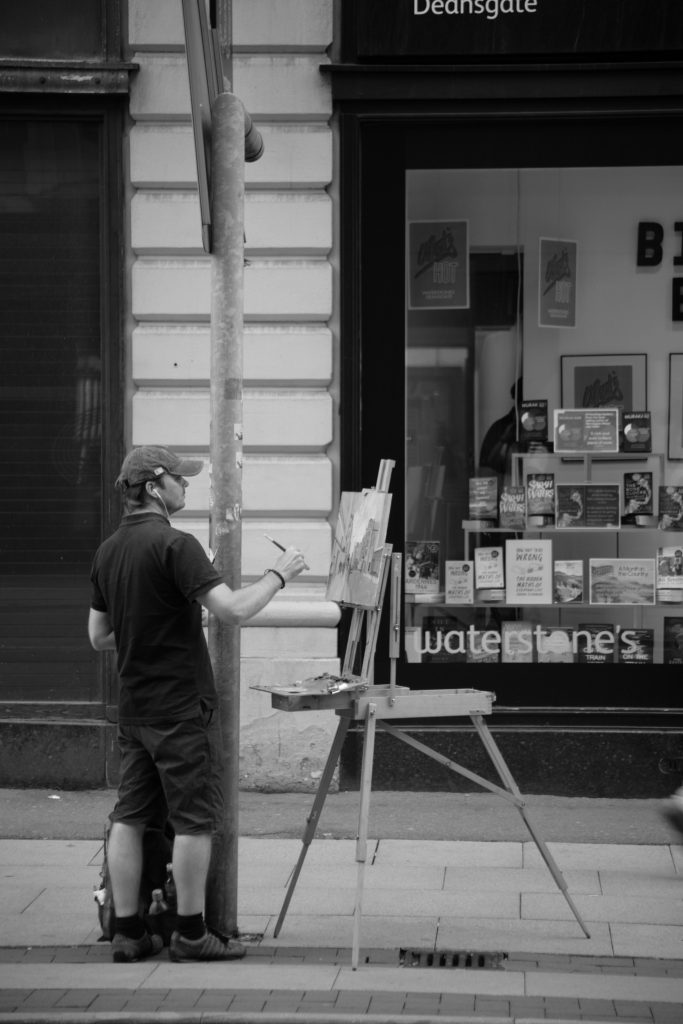 ‘I would just like to say thank you to the ROI members for electing me as a full member of the Royal Institute of Oil Painters. It’s been a long ambition of mine to get this accolade and to reach my goal seems quite surreal, especially after the year we have had.

My ambition started many years ago when I got chatting to a fellow artist who was having a solo exhibition at the then Blythe Gallery in Manchester, just off Canal Street. His name was John Mccombs ROI and his work just blew me away. It was in the late 90’s and a couple of years earlier I had been diagnosed with a tumour deep behind my left ear and just below my brain.  It was removed thankfully but it did leave me with some long lasting effects such as deafness, swallowing and voice problems.  One day after the operation I had shuffled to the window at Manchester Royal and saw my reflection in the tinted glass.  It was such a striking image it stayed with me forever and changed the course of my life. The scarred and paralysed side of my face was in shadow and the normal looking right side was in sunlight.  There was a straight vertical line running down the middle of my face which divided the two segments.  Light and Dark. I looked at myself looking back and decided there and then I was going to pursue my dream of becoming an artist.

As I got to know John over the years  and paint with him on Saddleworth Moors I decided I was good enough to enter one of the ROI exhibitions in London.  Amazingly I got one painting in and I was so pleased.  I remember trekking down to that there London and seeing the show, I didn’t know anyone but it was fantastic to see my work up amongst all these fine painters.

I have tried to exhibit every year and once set my mind on going for membership only to end up in hospital having another tumour removed.

It takes a lot of time and patience get in the ROI and rightly so, it has some of the finest oil painters in the country as members and so to be a part of that group means a great deal…

Once again Thank you to all the Members!’ 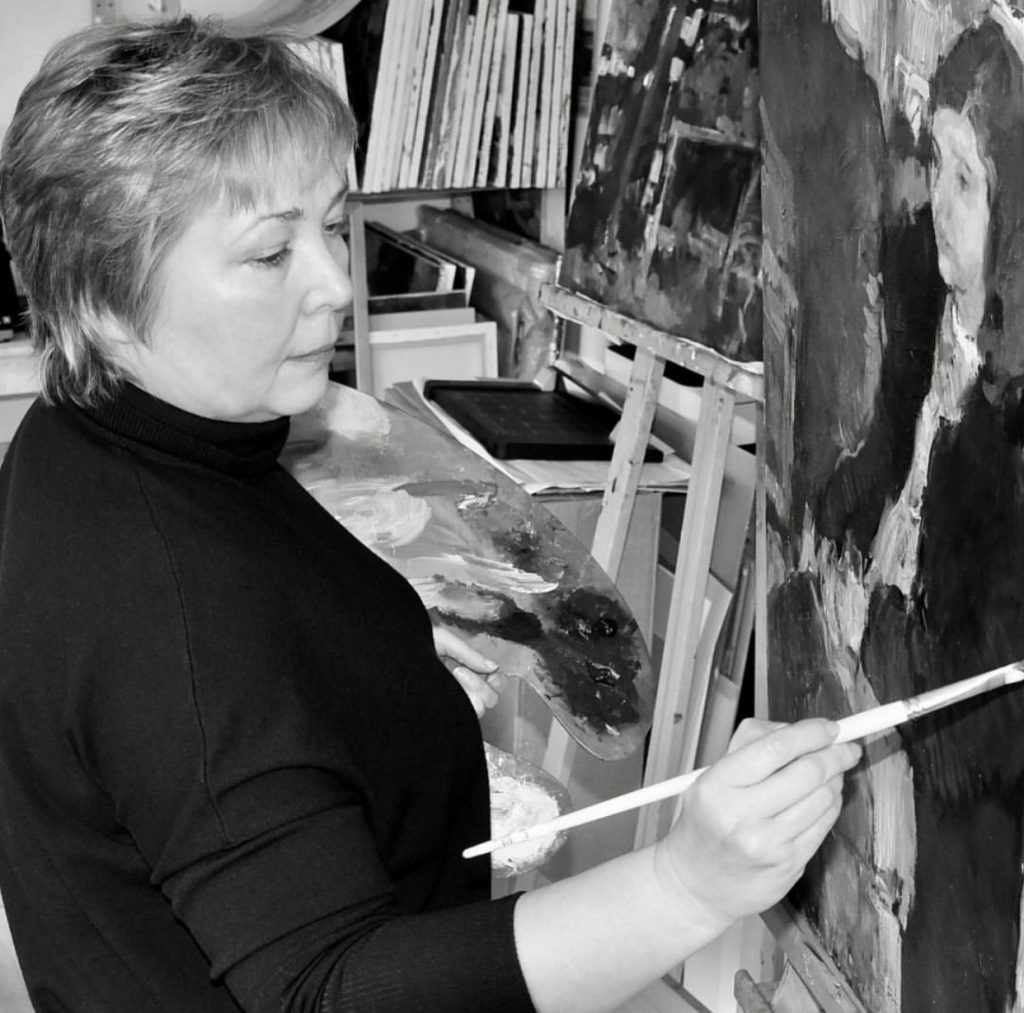 After graduating from the Academy of Arts in Riga, I worked for some time as an illustrator, drawing mainly from imagination and to tight deadlines.

I didn’t paint much in oils then, mostly using watercolour. But I was always drawn to observational painting so would skip lessons, joining students from the painting department when they went on their plein air trips. That life seemed romantic to me, so when after many years when I finally was able to choose, I turned all my attention to oil painting without looking back.

I studied oil painting myself, learning from the works of masters and spending time in museums. Later, the ROI and its members became an important source of inspiration and encouragement – and an example that supported my practice of painting both en plein air and in the studio in recent years. Their evenings of painting with a model during annual exhibitions are unique, instilling in all of us the desire to work from life. I truly feel part of a creative family – this is no better place for a painter to hone their craft. 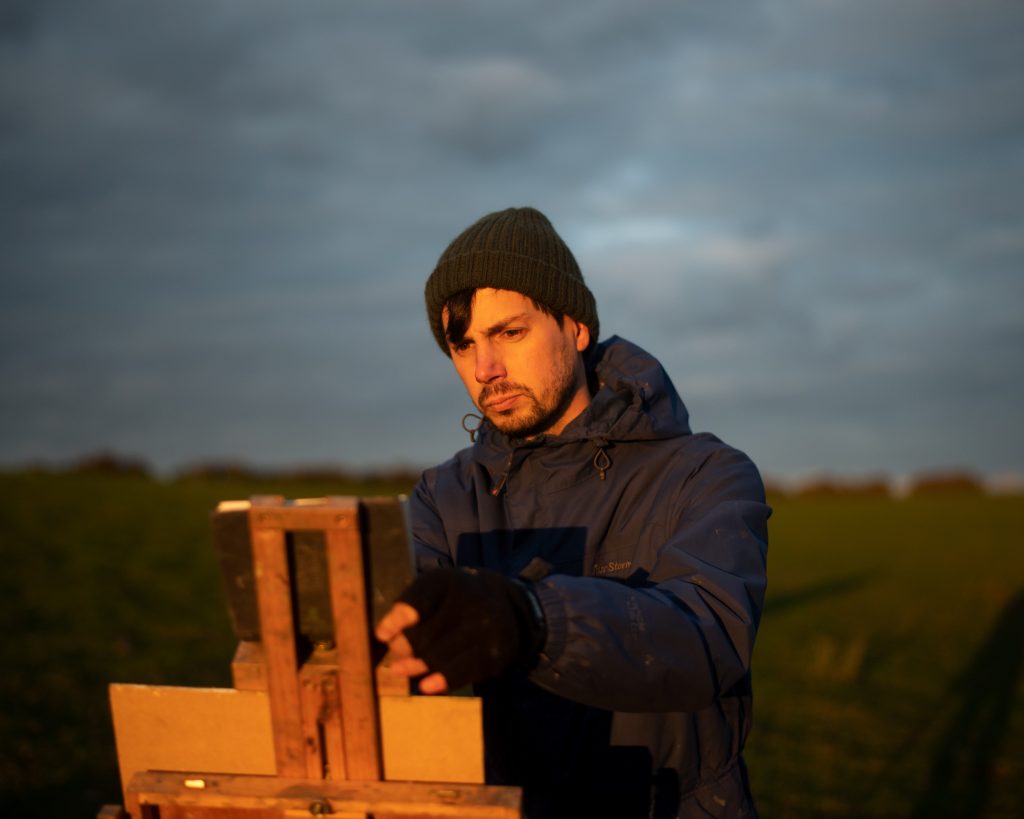 It’s a great privilege to be elected as a member of the Royal Institute of Oil Painters. The society has been a huge positive influence as a source of inspiration and encouragement and I am proud to be joining such a group of talented people who are so passionate about painting. I’m really excited about working within the society as a member and am greatly looking forward to meeting all friends, ROI members and otherwise, at a future Open Exhibition. 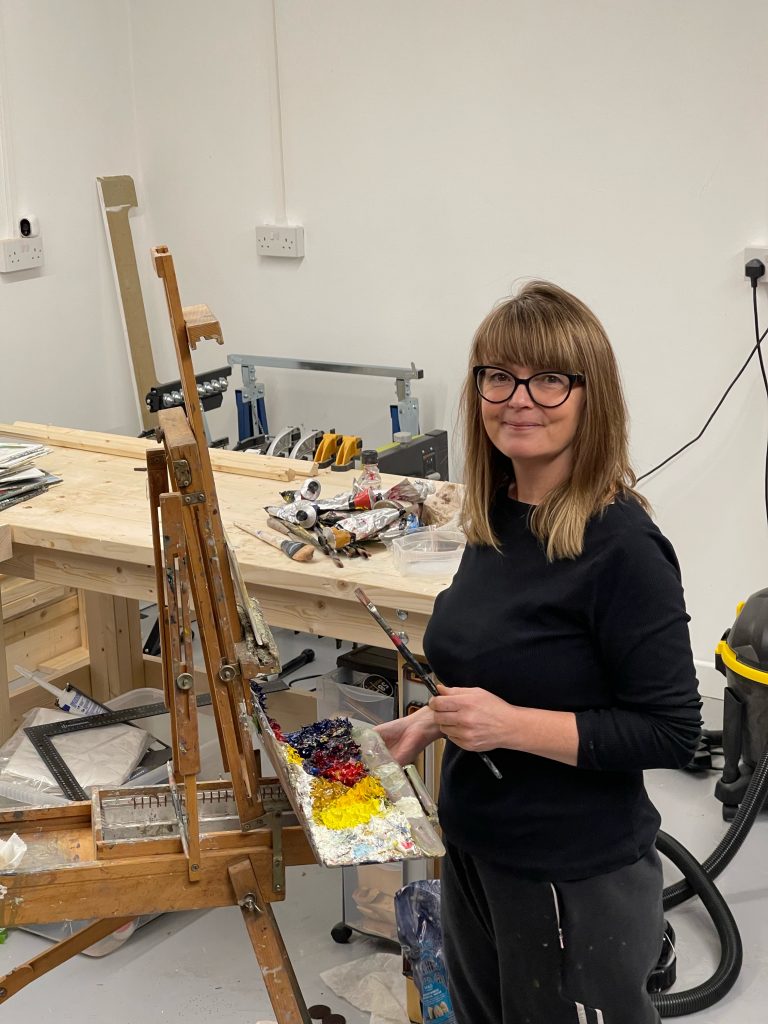 Amanda lives in Buckinghamshire and has been exhibiting since 2009. She tends to work on a small scale and is driven by a curiosity as to what you can make paint do e.g. capturing the shine on a pair of shoes, intricacies of tiles surrounding a fireplace or nailing the colours of new places visited:

I am passionate about directness in painting – where thick, present brush marks have purpose and energy, and I love to see this intensified in smaller works.

I am honoured and absolutely over the moon to have been elected an Associate Member of the Royal Institute of Oil Painters. For me, quality and a love of oil paint sit at the heart of what the ROI stands for, and this shines through in the work of ROI members. To have the opportunity to join such an amazing group of painters is incredible. A massive thank you to the ROI – and for the support and encouragement too. 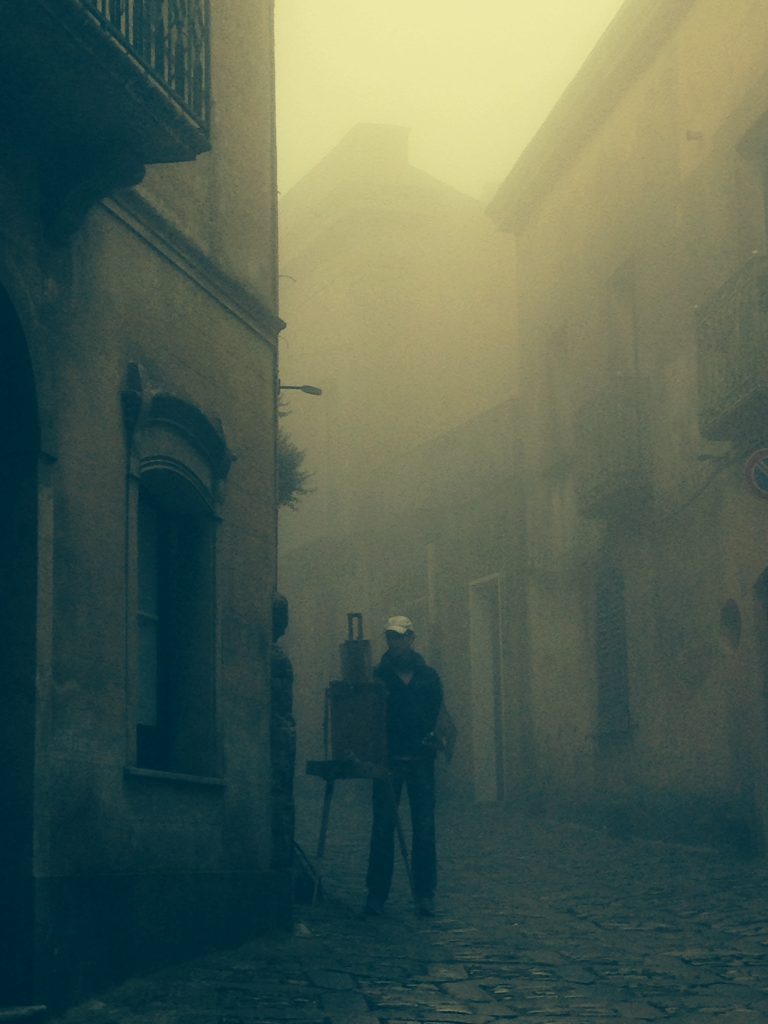 Benjamin switched to painting full time after he getting a PhD in theoretical physics at Cambridge. It was an ambition he’d held since childhood (basically “do some science first, then paint for the rest of life”).

Over the last 6 years he has done a lot of work outside but also portraiture and still-life indoors, always working directly from the subject. “Working in this way results in marks that are fast and reactive, and for me, it is the most effective way to capture what it feels like to be with the subject”. He does also create large studio paintings based on small plein air studies. “In these I try to recreate the energy and atmosphere of the smaller work using a more complex layering of paint”.

“It means a huge amount to me to be part of the ROI. I think I first encountered those three letters as a young boy gazing at the work of some very influential painters at Art-in-Action, a festival I used to visit every year in Oxfordshire. Then of course there were all those exhibitions over the years at the wonderful Mall Galleries. There are so many inspirational painters in the ROI so I feel very honoured.” 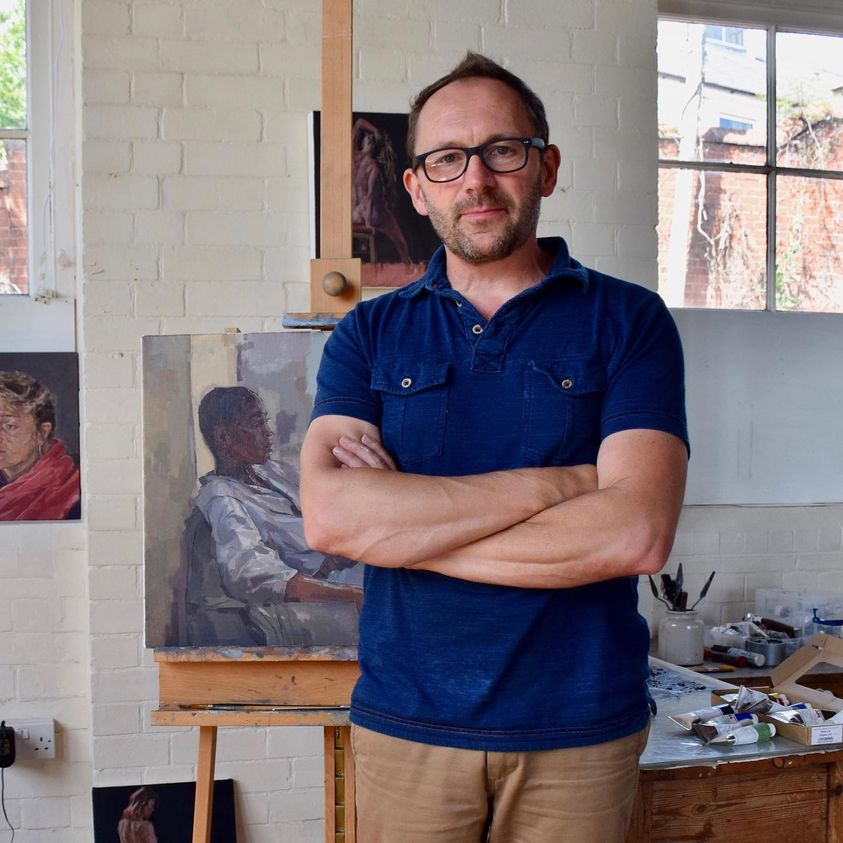 Greg studied illustration at St Martins School of Art and worked as an editorial illustrator in London in the 1980s before swapping this for a career in the fashion industry – travelling the world as an art director and working with some of the worlds top beauty brands.

‘Twelve years ago, I realised I wanted to be creative for myself and not just for others, so I set up a studio and began painting – it was the best decision I ever made.’

Today, he is an Academician with the South West Academy of Art, the Professional Oil Painting Ambassador for Cass Art and you may have seen him on Sky Arts Portrait and Landscape Artist of the Year TV shows – where he was a finalist.

Greg’s work seeks to capture a sense of energy or a nuance of relationship between light, colour and texture, creating atmospheric works that are visually and technically striking whilst holding a deeper narrative.

‘When I first exhibited with the ROI in 2016, it was such a special moment… to see my work hanging in the Mall Galleries, surrounded by artists I admired working at the top of their game. Now to be selected by those same artists to join them as an associate at the ROI is a real honour and a dream come true.’ 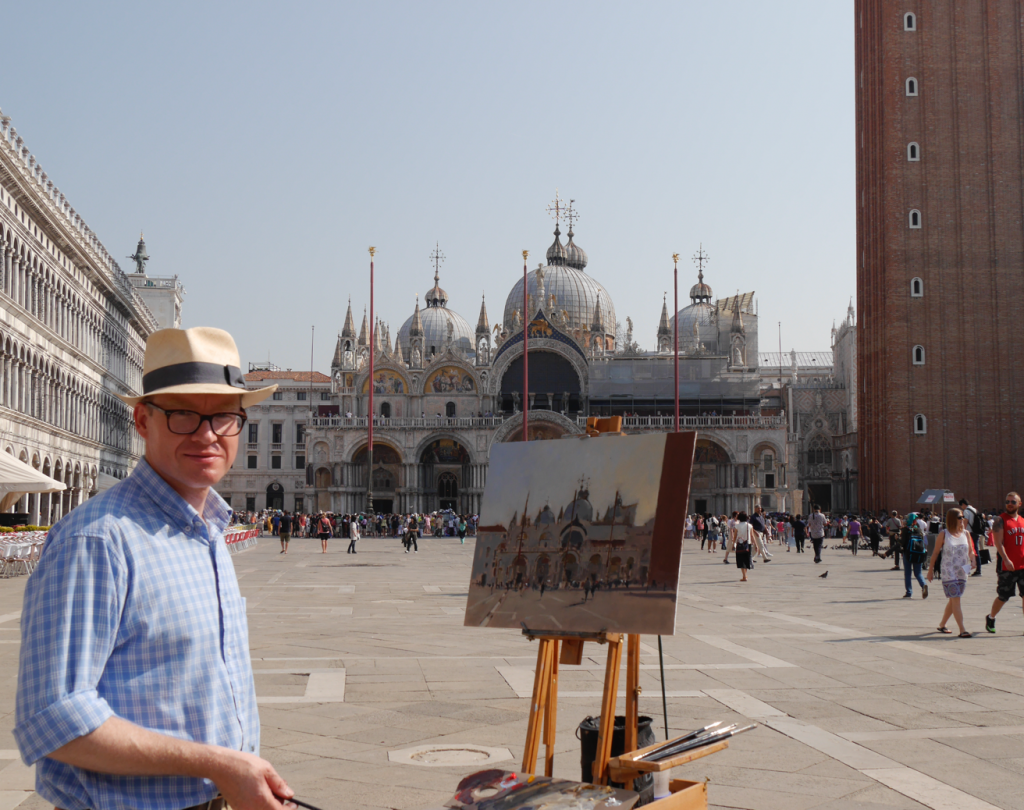 It is a great honour to have been elected as an Associate Member of the ROI.

I have exhibited with the ROI for the last 3 years consecutively.

I am a Past President of the Royal Society of Marine Artists.

Having painted all my adult life amongst the Kent landscape and seascape, I have come to be familiar with the many and varied moods of nature, the essence of which I strive to capture in paint. I take that principle with me, wherever I may be painting in the world.

My own work is principally landscape and marine painting in its broadest sense, from open landscape to busy urban themes, although increasingly I am drawn to other genres. This is certainly to do with having more time to paint, after 30 years practising as a Solicitor (incidentally, something I was very happy to stop doing!)

There are so many fine painters in the ROI, with different energies and approaches to the medium. It is both exciting and a privilege to find myself newly among them.